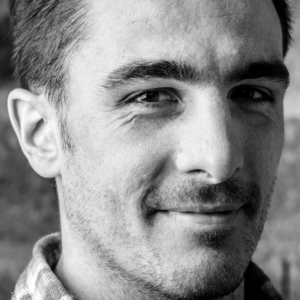 In 2010, Julien Devaux upon completion of his studies at ENSAD in Paris, founded his design studio to work on the object and space. His passion is to work with the raw material. His creative process begins with the questioning of the material or the expertise with which it has to work. He likes to be surprised by including results of tests and wealth of a collaboration with an artisan or a company working on the project.

Julien also attaches great importance to the coherence and balance between the technical, economic, environmental and human aspects of its projects while striving to inspire and develop both the skills and local assets of the project.

For TakeCaire, he designed two collections of objects with two artisans working with copper and blown glass, creating a series of vases “Chic&Choc”, Positive and Negative,

This collection of vases is an expression of his feeling of instability after a visit at the emblematic Tahir Square in 2012, where the glass, tormented by the copper, is on the edge of exploding.”

With “Mystere Mystere” collection of tidies and pendant lightings, the designer left to the artisan a space for free expression in the inner shapes of the objects combined to a refined and minimalist outer shape in blackened oxidized copper.

A real exchange of expertise between the work of the designer and the artisan. Therefore, each object is unique but the mystery remains whole.

His “Negative” vase  from Chic&Choc collection have been selected to the WHAT’S NEW? – SHARE by François Delclaux thematic space at Maison & Objet September 2019, where TakeCaire participates for the 1st time.

No products in the cart.